Now in its third year, the Forum explores the realities and requirements of leadership in practical terms, bringing students and top business executives together for a night of conversation and one-on-one networking. More than 140 students active in Student Government, campus ministry, athletics, volunteer activities, residence life, and clubs and societies attended the event. Accompanying the students were 30 W.B. Mason employees—most of whom are Stonehill alumni—including the company’s President & CEO Leo J. Meehan ’75 and its Chairman Steven Greene ’16. 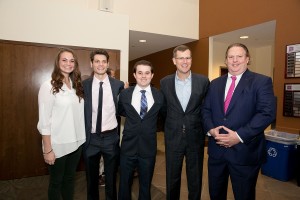 Both Kennedy and Meehan gave remarks to the students, along with a substantial Q&A session from Kennedy, covering a wide range of topics.

Kennedy spoke at length about success in both work and life, hailing David Ortiz as an example of excellence and the “ultimate leader” for the Red Sox. “We won’t fully appreciate his impact until many more years have passed, but I believe he is the most important player in Red Sox history given we won three World Series Championships with him on the team—and for his strength of character in the wake of the Boston Marathon bombing,” said Kennedy.

Offering a personal anecdote on the importance of work-life balance, Kennedy urged the students to keep family in-mind. When asked about his proudest achievement in life, Kennedy shared, “Father’s Day 2005, when Theo Epstein and I presented our fathers with World Series rings.”

One of the biggest topics of the evening was the “watershed deal” deal 17 years ago that led to W. B. Mason and Red Sox agreeing on advertising on the left field wall, an extra innings television show, and premium seats behind home plate. Asked if he ever considered walking away from those negotiations, Kennedy replied, “Not at all. That was probably one of our easiest deals. The key in sales is to deal with the decision makers and in Leo Meehan and Steve Greene from W.B. Mason we had real decision makers in the room. That was the basis for creating an authentic relationship between us.”

In introducing Kennedy, W.B. Mason President and CEO Leo J. Meehan also recalled those watershed negotiations back in 2002, noting that the deal with the Red Sox proved to be the “single biggest thing that launched W.B. Mason on its way to corporate success and revolutionizing how the company does business.” In fact, to emphasize the point, Meehan shared a short, humorous video with W. B. Mason employees acting in the roles of the company and the Red Sox negotiators.

Reflecting on the Forum, Francis X. Dillon, vice president for advancement at Stonehill noted, “The room buzzed with lively conversation as students met with alumni now working for W. B. Mason and had the opportunity to engage Sam Kennedy on all kinds of topics and issues. It is incredible to see these kids get a different kind of education, holding their own with successful professionals from all walks of life. Every year, the Forum keeps improving and our students sense its value, which was reflected in last night’s record attendance.”

“Regardless of your major or area of leadership, the advice that all of the speakers offered us will help us along our paths leading into the future,” said Ashley Hitchcock ’18, “The event and conversations assured the senior class that come May, we will be ready for whatever comes our way.” Hitchcock will be attending Northeastern University's MSA/MBA program after graduation in May.

“As a die-hard Red Sox fan, I was star-struck when given the chance to meet Sam Kennedy. I aspire to someday be in his shoes and to lead in the same way that he does,” explained Ryan Peck ’18. After graduating in May, Peck will begin a master’s degree program in accounting at Northeastern University and will start working for PriceWaterHouseCoopers in January.