Pamela Bardhi '13 was just 22 when she took on her first house-flipping project. Vacant and deteriorating, the house that she purchased in Stoughton, MA needed a full gut renovation. “I looked at the house and knew that I could bring it back to life,” Bardhi said. She proceeded to tear down walls, install a brand new electrical system, and add a full master suite.

“Starting anything new is terrifying, but I always try to keep in mind that regret is worse than fear,” she says of the project. Several months after Bardhi completed renovations, a family attended the open house and purchased the property. “I realized that I had given the family a place to create memories together. I am so glad that I did not let fear hold me back from doing that.”

Fearlessness is a common thread in Bardhi’s career. Since graduating from Stonehill less than a decade ago, she has made bold moves to become a small business owner, a licensed real estate broker, and the youngest female general contractor and real estate developer in Massachusetts. Her main company, Bardhi Investment Group, now rebranded as Mosche Development, has developed over $15 million in real estate assets within the last four years.

“When I go into meetings or events and talk about what I do, people are usually a bit surprised,” Bardhi admits. “There are not many young females in the construction industry.”

Still, the challenging dynamics of the construction world are no match for Bardhi’s grit. “You can’t get shaky,” she says. “You need to be confident in who you are and what you know. Then you need to do what you said you were going to do and do it well. That’s the key to establishing credibility in any business.”

Bardhi backs up her confidence with a strong business acumen. In terms of acquiring her knowledge and skills, she shares that her family and her Stonehill education were essential.

When Bardhi was five years old, she immigrated from Albania to the United States with her family. No one in the family spoke English. “My parents started hustling right away,” she says. Between performing manual labor jobs and making pizza deliveries, her father was balancing three jobs at a time.

Within a few years of the family’s arrival in the US, one of her father’s mentors gave him a loan to start his own pizza restaurant. He purchased West Napoli Pizza in West Roxbury and paid back the loan in just two and a half years. “Using his work ethic, my dad was able to make his business happen against all odds,” says Bardhi, who started helping out at the restaurant when she was ten years old. “My family is still my main motivation to become a successful entrepreneur. I want to make it big for my parents because they made the sacrifice for me to have a better life.”

When Bardhi began her education at Stonehill, she was drawn to classes that complemented her early business experience. In her sophomore year, she decided to create her own entrepreneurship major as part of the interdisciplinary studies program. She met with Professor Peter Ubertaccio to design a personalized curriculum of business, graphic design, and communications. 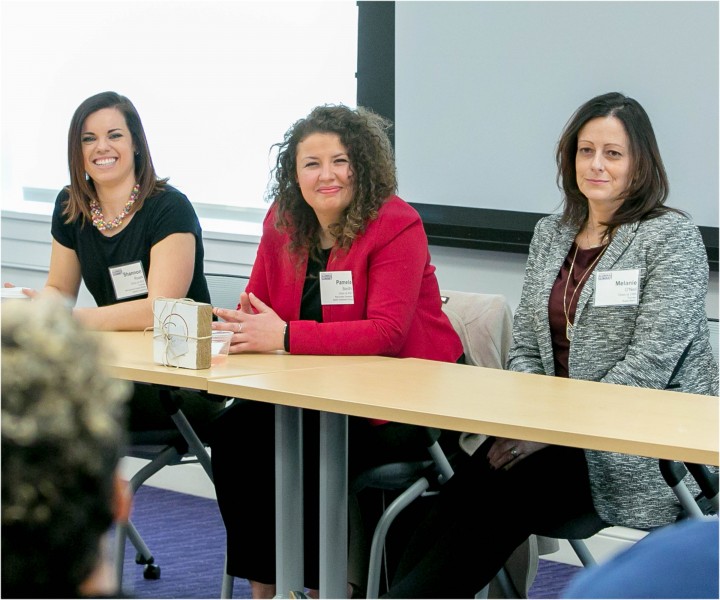 “I have immense gratitude for my Stonehill professors,” she says. “Professor Robert Spencer taught me everything about business strategy and how to be assertive. Professor Michael Mullen helped me to rethink the value of money and time. Professor Anne Mattina taught me all about connecting with people and understanding different perspectives.”

Learning business ethics was a central component of all of her classes. “One of the reasons I have succeeded as an entrepreneur is because of my ability to connect and communicate effectively,” she says. “I always take a collaborative approach with my clients. It is critical for me to build lasting relationships with them.”

As a culminating project for her major, Bardhi undertook a directed study that involved writing a business plan for her own ice cream cafe, Ria Cafe. The restaurant was in active construction during her senior year. “I was learning as I went,” recalls Bardhi on the right, center at a recent Alumnae Summit.

“Even though I had a lot of experience from working at my parents’ restaurant, it was different when it was just me. I needed to step up and execute.” She organized contractors, developed product lines, and organized price points—all prior to her Stonehill graduation.

When Ria Cafe opened in the spring of 2014, Bardhi implemented her original plans while also allowing for some shifts based on customer response. For example, she decided to eliminate her pastry counter in favor of offering traditional ice cream alongside of regular gelato. “The opening of Ria Cafe showed me that business is a process,” she says. “When things didn’t go well, I had to learn how to pivot and be open to changes.”

With Ria Cafe and Mosche Development now in full swing, there’s no telling where the dynamic “serial entrepreneur” will take her next venture. Whatever the business, Bardhi says that it’s important for her heart to stay in it. “My businesses are more than just streams of revenue,” she says. “They are my passions.”