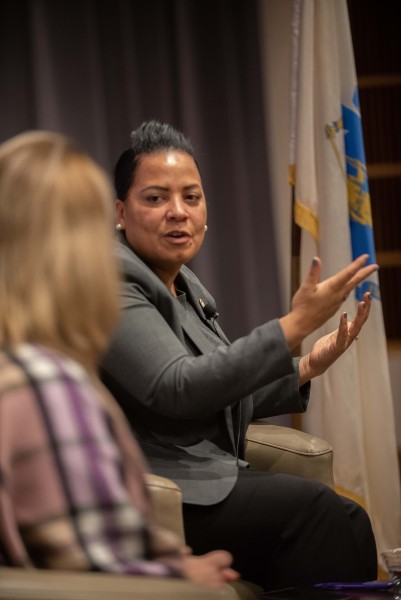 It was a time when inter-racial couples faced difficulties but her parents, who eventually raised five children in Cambridge, instilled a sense of hard work and compassion in their children.

“This is why I’m able to talk about really uncomfortable topics comfortably because it was my childhood growing up,” Rollins, who spoke Nov. 14 at the Martin Institute at Stonehill College, said.

Rollins oversees a staff of 300, handles 35,000 cases yearly and said she is working to create meaningful and substantive criminal justice reform. The 66-page memo, titled “The Rachael Rollins Method,” examines alternatives to incarceration. These include a wide range of community programs, as well as treatment programs, for offenders. The effort also takes a hard look at bail for offenders, looking at the least restrictive bail conditions unless there are other reasons for higher bail or for the defendant to be held.

Rollins said she has seen firsthand how the opioid crisis and incarceration affects families: She said she and her daughter are taking care of her two nieces, a result of her sibling’s battle with opioid issues and incarceration. 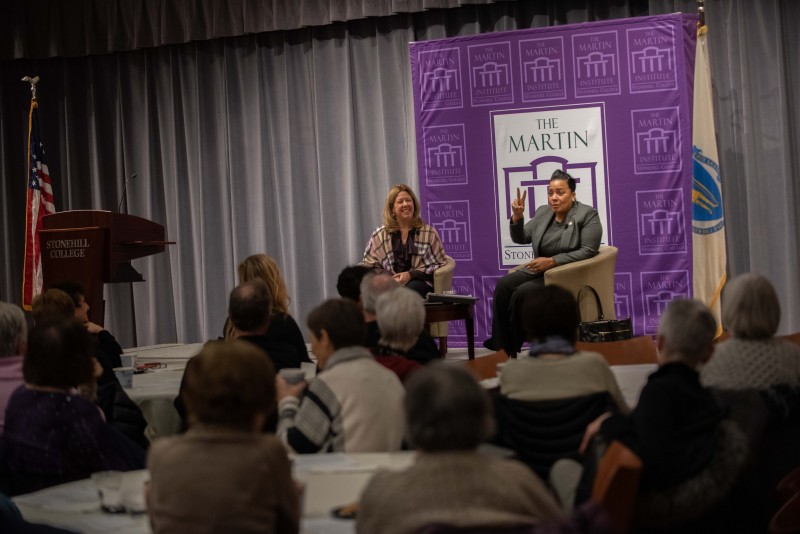 Rollins is a graduate of the University of Massachusetts, where she received her bachelor’s degree. She then went to Northeastern University School of Law, where she interned for the United States District Court Judge Robert E. Keeton. After finishing school, she attended Georgetown University Law Center.

After finishing her time at Georgetown, she headed back to Massachusetts where she worked for the National Labor Relations Board.

“I understood the importance of unions and collective bargaining experience,” Rollins said.

In 2007, Rollins joined the United States Attorney’s Office as an assistant United States Attorney, where she was a federal prosecutor for five years. From there, she became the general counsel of the Massachusetts Department of Transportation, later becoming chief legal counsel of Massachusetts Port Authority where she oversaw Logan Airport, the seaport and Conley terminal.

As district attorney, Rollins oversees more than 20 small districts and neighborhoods. Suffolk County has the highest rate of homicides and nonfatal shootings, of which Rollins oversees all cases.

Since taking office, there have been 40 murders.

Rollins said she looks for solutions to problems.

“Everyone can complain but do they have proposed solutions?” Rollins said. 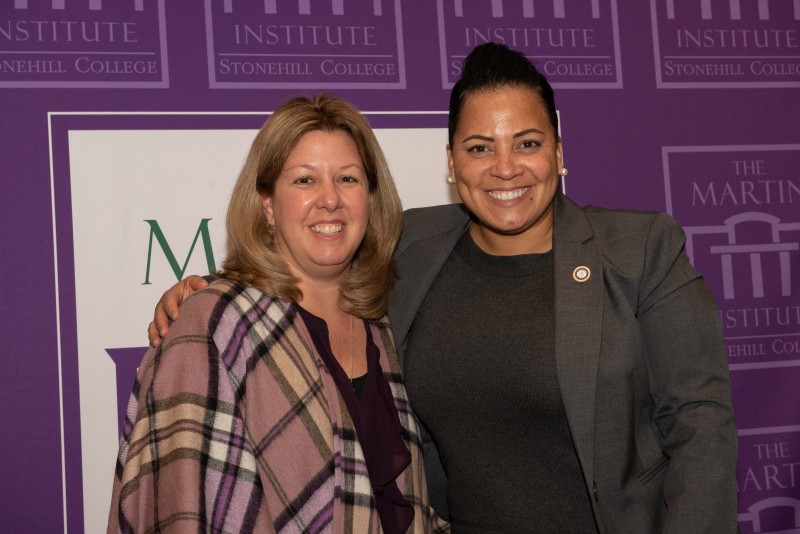 The Boston Municipal Court has eight divisions, plus Chelsea District Court and Suffolk Superior Court. When coming into office she looked at what was “clogging up” the system and those courts.

So Rollins came up with 15 categories, where traditionally the offender would be looking at jail time. Instead, she came up with the idea of getting to know the person and figuring out the root cause as to why they were sitting in that courtroom on that day.

“If we are putting thousands of dollars into you I want it to be for hope and opportunity,” Rollins said.

This article by Katie Rayner appeared in the November 20, 2019 edition of The Summit and of the Taunton Daily Gazette