Alums run into each other and faculty at some of the most unexpected moments and places at home and abroad.  Below we share five such stories. 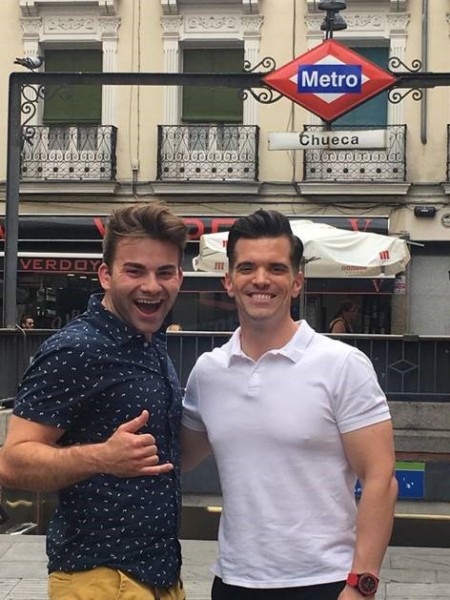 As Spanish Professor Peter Mahoney reported recently; I am currently in Madrid completing a research project, and my former student, Steven Moura ’16, who completed a Master’s degree in Spanish in Alicante, wrote to ask if I was here. He was passing through town on his way to visit friends and spend some time in Spain before beginning Medical School this fall. What a great coincidence!

In 2001, my wife, Marybeth (Donovan) DeNuccio ’68 and I were sifting for gold at a mine in Fairbanks, Alaska. I noticed another traveler a distance away staring at me. He pointed to me and then rapidly walked over to where we were panning the silt. He said excitedly, Is that a Stonehill College ring? I held up my fist and the ring, and said Bill DeNuccio, Class of ’68 to which he replied, Well hello, I am Father So-and-So, the Stonehill bursar. I knew I recognized that ring. We enjoyed a lengthy conversation sharing Stonehill stories and memories of people we each knew even though we did not share the same years at Stonehill. We then went our separate ways, but somehow I felt like we had just stepped back in time to a common home brought together by the unique Stonehill College class ring. Bill DeNuccio ’68

(Editors Note: We checked our records but can't identify who the Bursar was. If any readers can clarify this or correct us, we would appreciate it.)

It was June 5th, 2017 at 5:30 a.m., my water broke and I went into labor with my second child. We took our time going to Women & Infants Hospital in Providence knowing it might be a while....we spent the majority of the day waiting and that's when I met Chrissie (Marques) Juszczak ’03, my labor and delivery nurse. After an 18-hour labor and another few into the wee hours of the next morning, Chrissie said to me at almost 4 a.m., I finally figured out how I know you. The excitement from the day and my complete exhaustion had me surprised. I had no idea in that moment how we knew one another. She said, We graduated from Stonehill together! I couldn't believe it. I bonded with Chrissie from the moment I was reintroduced to her in Labor & Delivery. She stayed by my side through one of the hardest days of my life. I reached out to her shortly after my son's birth, on his first birthday, and she'll be one of the first people I contact this year on his second birthday. Life has a funny way of bringing people together in the most special moments. Carla (Moody) Neville '03 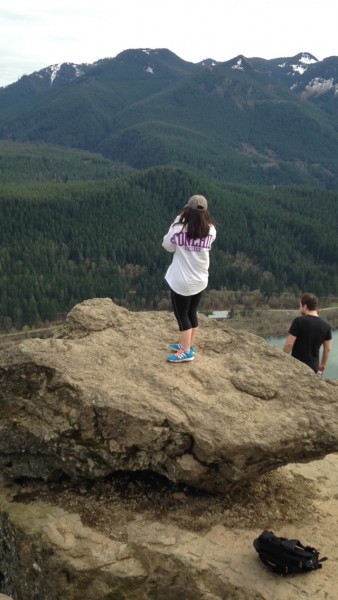 In 2016, living in the Seattle area, I went for a hike at Rattlesnake Ridge near North Bend, WA. I was relaxing at the top of the mountain when I spotted a girl wearing a Stonehill shirt! I was so excited. What are the odds of finding a fellow Skyhawk on top of a mountain on the west coast? I introduced myself to her. Unfortunately,  I don’t remember her name but I snapped a photo of her in her Skyhawks shirt so I could remember the encounter. It was such an unexpected meeting, and now it is a fun memory. Caitlin Shanly ’13
(Editors Note: If anyone knows who the mystery alum is, let us know.)

In April, entering a physical rehab center in Virginia, I bumped into Dick McCormack '53. He  immediately asked if I had gone to Stonehill! That was amazing enough since we had not crossed paths for about 60 years after my first days at Stonehill. We renewed acquaintances for a few minutes before going to separate appointments. During that brief time, I reminded Dick that his sister Judy was a classmate and great friend of mine for several years, and that I knew her husband, Larry May, for years at Milton High and Stonehill. In some ways our meeting was not as miraculous as it may seem. When we first met, there were only two buildings and about 500 students. Jack Rafuse ’58