Six years ago, Chemistry Professor Cheryl Schnitzer (right) and the science crew at Stonehill College wanted a laser. But it was expensive – prohibitively expensive.

So they decided to build their own.

It took a whole summer in 2011, but Schnitzer and company did it. Now, Stonehill is one of just a dozen or so undergraduate colleges with a femtosecond (read: really, really fast) laser lab.

And now, in collaboration with Massachusetts Institute of Technology, Stonehill College is looking to kick their focus on laser (or photonic) programs into a new era.

Tuesday, Stonehill announced a collaboration with MIT focusing on a new initiative in the field photonics: the study of light and photons.

About 60 people gathered at Tuesday’s event in Donahue Hall, from educators to Massachusetts industry leaders. All were itching to hear of a potential future in photonics – widely regarded as the next big technological revolution.

Here’s the big thing about photons: they move at the speed of light. So every big technology company (Facebook, Google, Amazon) has an interest in them. Driverless cars, 5G phone networks, and cloud computing are all possible because of integrated photonics.

But colleges and universities nationwide have been slow to focus their programs on photonics, and more specifically, integrated photonics: how photons relate to technology and manufacturing.

And Schnitzer, with the same ambition that brought Stonehill their femtosecond laser in 2011, joined forces with Physics Professor Ruby Gu to put Stonehill on the same track. (Below is Stonehill College President Fr. John Denning as he talks with physics professor Guiru Gu)

“We feel like we have an obligation to expose students to 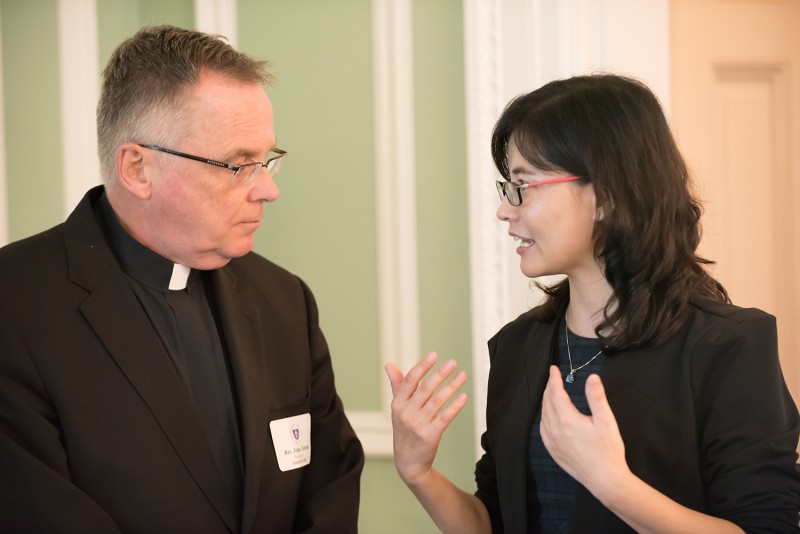 this,” said Schnitzer, in her 17th year as a chemistry professor with Stonehill. “This market is exploding, and they need trained people coming out of college.”

The greater Boston area (or the I-90 corridor) could be “the Silicon Valley for the next technology,” involving photonics, he said.

About a dozen local technology companies attended the event.

He sees a huge market for technology companies south of Boston.

“There’s virtually no high-tech management south of Boston,” Lescinskas said. “So if you can incubate new technologies at a place like Stonehill, that opens a whole new area for businesses.”

“Our goal is to get photonics on the local radar,” said Gu. “We hope to define the knowledge base, skill set, and equipment required to support the growth of integrated photonics in our geographical region and to offer programs that align higher education with industry needs.”