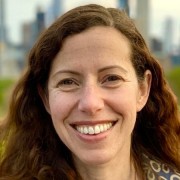 Sarah Gracombe is a Professor of English and the Faculty Director of the IDEAS (Integrating Democratic Education at Stonehill) Program. Her teaching and research interests include Victorian representations of national identity, race, gender, psychology, and religion, particularly constructions of Jewishness.

This research has been supported by organizations including the Whiting Foundation, the Memorial Foundation for Jewish Culture, and the University of Pennsylvania's Katz Center for Advanced Judaic Studies. Her work has appeared in journals such as Nineteenth-Century Literature, Philological Quarterly, Prooftexts,Victorian Periodical Review, and Literature Compass, the Blackwell Encyclopedia of Victorian Literature, as well as the collections George Du Maurier: Illustrator, Author, Critic (Ashgate 2016) and the forthcoming Bastards and Believers: Jewish Converts and Conversion from the Bible to the Present (University of Pennsylvania Press). Her current project is Reimagining Ruth: the Book of Ruth in English and American Culture, 1800-1940.