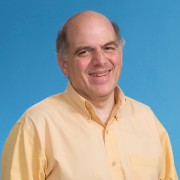 Dr. Liotta joined the chemistry department in 1993 after three years as a National Institutes of Health postdoctoral fellow in the laboratories of S. J. Benkovic at The Pennsylvania State University.

After B.S. in chemistry from The Pennsylvania State University, Professor Liotta carried out his Ph.D. research with B. Ganem at Cornell University. His Ph. D. thesis focused on the design and synthesis of organic molecules which were subsequently used to probe the chemistry of carbohydrate processing enzymes. His postdoctoral research involved the study of antibodies being used to catalyze organic reactions, thus the term catalytic antibodies. He has numerous publications in the chemical literature.

There are many enzyme-catalyzed reactions for which the mechanisms are unknown and cannot be easily predicted.  These biological systems offer an exceptional opportunity to discover new, fascinating chemical and biological knowledge, which could have medical and industrial significance.  Synthesizing molecules to probe into the mechanisms of such enzyme reactions is the central theme of Dr. Liotta's research.  The strategy involves a combination of chemical and biological techniques.  The careful design and synthesis of organic molecules is followed by testing those molecules in the selected biological systems.  An example of the type of project that Dr. Liotta is pursuing is give below.

Structure-Function Relationship for the Inhibition of Glycosidases: Carbohydrates are the most widely distributed, naturally occurring organic compounds on earth. Most of these carbohydrates exist in the form of oligosaccharides and polysaccharides. Oligosaccharides and polysaccharides have a very high degree of diversity in their biological structures and functions.  This diversity is not only the result of the many monosaccharides from which they are constructed but also the result the different ways the monosaccharides can be linked to each other. The functions of these polysaccharides and oligosaccharides include the storage of chemical energy, the composition of cell walls and exoskeletons, the mediation of environmental changes (e.g. pH, temperature, oxygen concentration), the lubrication in the movement of muscles and joints, and the structural support of skin, cartilage, and the cornea.  In addition, polysaccharides and oligosaccharides are also a major component of glycoconjugates (carbohydrates covalently linked to proteins and lipids). The carbohydrate moieties of these glycoconjugates serve to establish and stabilize protein conformations, direct the secretion of proteins from cells, control protein turnover and protect proteins from degradation.  They also specify biological recognition events that are involved in cell-cell interactions.  These cell-cell interactions control and influence the growth and differentiation of cells, the formation of organs, the processes of bacterial and viral infection, the formation and metastasis of tumors, and the prevention of autoimmune reactions.

All living organisms have enzymes that allow for the processing (synthesizing, modifying or degrading) of these oligo- and polysaccharides.  Small molecules that selectively inhibit specific carbohydrate processing enzymes are of great value in the study and understanding of biological processes that involve oligo- and polysaccharides.  In addition such inhibitors have found widespread use in medicine. Polyhydroxylated pyrrolidines (e.g. 1 and 2), indolizidines (e.g. 3 and 4), and pyrrolizidines (e.g. 5) have been known for a long time to specifically inhibit many of these carbohydrate-processing enzymes.  However, not every possible stereoisomer of these iminosugars has been studied which leaves holes in the understanding of the structure activity relationship of these compounds.  To fully understand the structure activity relationships of these compounds, all possible stereoisomers need to be synthesized and studied.

The research conducted by Dr. Liotta and his student collaborators involves the development of general asymmetric synthesis for every possible stereoisomer of these polyhydroxyalated alkaloids and the subsequent screening of them as enzyme inhibitors. The inhibition results, in conjunction with molecular modeling calculations, will be used to develop structure-activity relationships for the inhibition of these enzymes.  Dr. Liotta has received a National Science Foundation grant in the amount of $225,000 in order to fund this project.  This project has also received funding from the Stonehill College SURE program, Pfizer Inc. Undergraduate  Summer Research Fellowship and the Petroleum Research Fund.  Since the summer of 1994, over 75 undergraduate students have worked on this project resulting in 54 coauthored presentations and five coauthored scholarly publications.