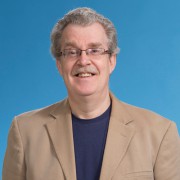 Karl Giberson is a science-and-religion scholar, speaker, and writer. He has lectured at the Vatican, Oxford University, London's Thomas Moore Institute, the Ettore Majorana center in Sicily, the Venice Institute of Arts and Letters, the University of Navarre in Spain, a conference in Brazil, and at many American venues, including MIT, Brigham Young, Xavier, Columbia University, University of Colorado, the Harvard Club of New York and others.

His books have been translated into Spanish, Polish, Italian, and Romanian and he has been featured in magazines from Spain and Brazil, as well as many American publications, including USA Today, Salon.com, Newsweek, and the Boston Globe. He has appeared on NPR's Talk of the Nation, the Milton Rosenberg Show and other radio programs, and been featured in the NY Times "bloggingheads" video series with Robert Wright as well as WBZ's Higher Ground program. He has published hundreds of articles, reviews, and essays, both technical and popular, in a broad cross-section of media outlets including the NY Times, USA Today, the Guardian, the Daily Beast, and CNN.com.

He has written, co-authored, or edited 11 books, and contributed to many edited volumes.  His books include: Worlds Apart: The Unholy War Between Science and Religion (1993, Beacon Hill); Species of Origins: America's Search for a Creation Story (2002, Rowman & Littlefield, with Don Yerxa); Oracles of Science: Celebrity Scientists Versus God and Religion (2007, Oxford University Press, with the late Mariano Artigas); Saving Darwin: How to Be a Christian and Believe in Evolution (2008, HarperOne), which the Washington Post called "One of the best books of 2008"; The Language of Faith and Science: Straight Answers to Genuine Questions (2011, InterVarsity, with Francis Collins); Quantum Leap: How John Polkinghorne Found God in Science and Religion (2011, Lion Hudson, with Dean Nelson); The Anointed: Evangelical Truth in a Secular Age (September, 2011, with Randall Stephens), published under Harvard University Press's Belknap imprint; The Wonder of the Universe: Hints of God in a Fine-Tuned World (2012, InterVarsity Press); Seven Glorious Days: A Scientist Retells the Genesis Creation Story (2012, Paraclete Press), Saving the Original Sinner: How Christians Have Used the Bible’s First Man to Oppress, Inspire, and Make Sense of the World (2015, Beacon Press) and Abraham’s Dice: Chance and Providence in the Monotheistic Traditions (2016, Oxford University Press).

Giberson blogs at The Huffington Post where his articles have generated thousands of comments and are frequently featured. He was the founding editor of Science & Theology News, the leading publication in the field until it ceased publication in 2006, and editor-in-chief of Science & Spirit magazine from 2003-2006. One of his essays appears in a popular anthology used to teach freshman writing. From 1984 to 2011, Giberson was professor of physics at Eastern Nazarene College where he developed interdisciplinary courses and programs, including the college's first honors program. He has taught the traditional physics curriculum and also developed and taught courses in the history of science, critical thinking, contemporary issues, science & religion, as well as topical honors seminars. For 3 years, ending in 2009 he was the program director for the Venice Summer School on Science & Religion, located at the Venice Institute for Arts and Letters. In 2008 Giberson worked with Francis Collins to create the BioLogos Foundation, an initiative promoting science to religious constituencies inclined to reject it.

Giberson’s research interests include the interaction of science and religion, especially the contemporary conflict over evolution. He has been the recipient of grants totaling several million dollars; his most recent $200,000 grant from the Templeton Foundation funded a major international conference at Stonehill in the fall of 2014.