Over Reunion 2019, the campus buzzed with activity as more than 1000 alumni celebrated their graduation anniversaries with many family, friends, and faculty in attendance as well. Below are highlights from the event-packed weekend involving 10 classes from 1969 to 2014 and many earlier alums who are Pillar Society members. 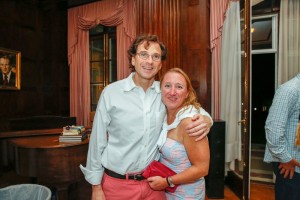 The first day of Reunion, Friday, was one of hugs, handshakes and high fives as alums greeted old friends or bumped into folks they may not have seen in a long time. That sense of joy carried into the individual class receptions in various locations across campus on Friday. Attending the Class of 1979 reception Bridget (Simmons) Murphy ’97, who was there with her husband Steve Murphy ’79, said  “My heart is always full when I return to campus.” 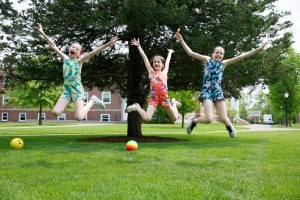 Many children were on campus on Saturday afternoon enjoying free ice cream, face painting, games and just running free while moms and dads caught up with classmates. “Walking around campus with our kids on a beautiful day and seeing friends while the kids have plenty to keep them happy and entertained was so nice. We had a great time,” said Megan (Killilea) Richmond ’04. 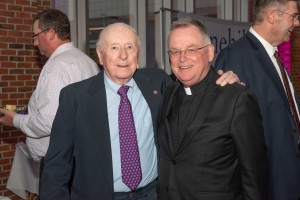 Big shout out to Jack Kelly ’52, who was on campus for the weekend representing the College’s first graduating class. Jack recently celebrated his 90th birthday and remains active on the Alumni Council. What an example of Light and Hope! 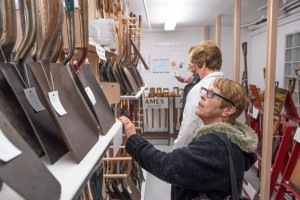 Eighteen members of the Class of 1969 carved out time to meet with our Archivists for oral history interviews on Friday. Preserving our history is important and alumni interviews like these really help us to deepen our understanding of the Stonehill story. 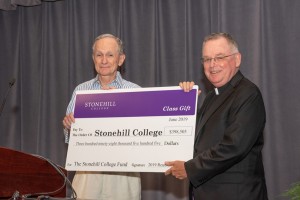 At Coffee with President on Saturday morning, Chair of the Stonehill College Fund Ken Michel ’68 presented Father John Denning with a Reunion gift of $398,505. We are blessed with loyal, generous alums and we know it. Heartfelt thanks to all who made this gift possible. 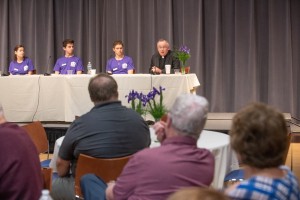 At Coffee with the President, alums expressed interest in a range of issues—cost of education today, scholarship funding, why students choose Stonehill, study abroad and service options, and communications platforms and preferences. Student Alumni Association members Lucas Sartori '20, Emma-Cate Rapose ’20 and Michael McShane ’21 were on hand to help us answer questions and to share their Stonehill experiences with the alums. 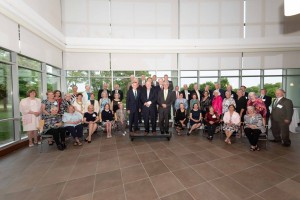 Celebrating the 50th anniversary of their graduation, 53 members of the Class of 1969 were inducted into the Pillar Society before a full house of past Pillar inductees in the Shields Science Center on Friday night.  In presenting Fr. Denning with their class gift of $106,000, Joanne Harrington ’69 noted that the funds will benefit two student scholarships—one named after legendary Alumni Minister Rev. Jack McCarthy, C.S.C. and the other named in tribute to the Pillar Society. The gift will also underwrite a plaque in the May building that pays homage to the Old Student Union, which is where past generations of students used to gather and hang out. 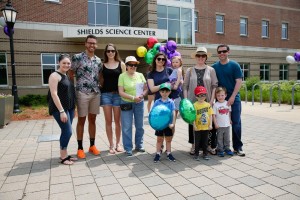 While Reunion always features a sense of nostalgia for old ties and past experiences, it is also about building new connections. Over Reunion, 33 members of the Student Alumni Association spent the weekend greeting, meeting and assisting our alumni guests. “My classmates and I were so impressed by the students we met. Helpful, gracious, interested and very professional, they represent themselves and the College very well.  Seeing the pride they take in representing Stonehill augurs well for the College’s future,” Helene (Donnelly) McGovern ’79. 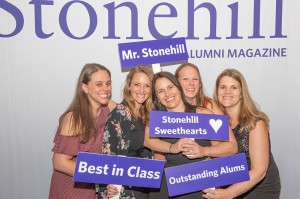 The Stonehill Alumni Magazine (SAM) photo booth proved to be a popular item on Saturday night in the Dining Commons as alums posed in front of a SAM backdrop with various headline options including Mr. Stonehill, Queen of the Summit, Stonehill Sweethearts, Best in Class and You’re Never Over...Hill. 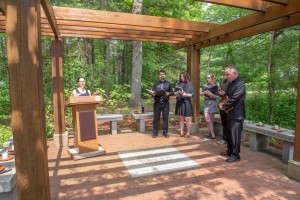 At the Matthew McDonough Memorial adjacent to the Dining Commons, members of the Class of 1999 led by Lisa Richards ’99 remembered Matt, a beloved classmate who died suddenly soon after his graduation. Twenty years later, Matt remains in their hearts and his memorial site now also remembers five other deceased classmates. Fr. Denning opened and closed the liturgy while the Chapel Choir provided beautiful music and classmates lit candles in remembrance. At two memorial masses over the weekend, all deceased alumni were remembered as were deceased Holy Cross priests and brothers who played major roles in the creation and success of the College. 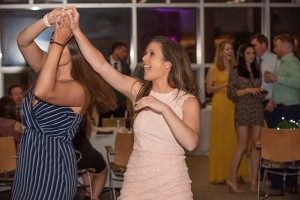 At one stage on Saturday night, it looked as if everyone was on the dance floor in the Dining Commons!